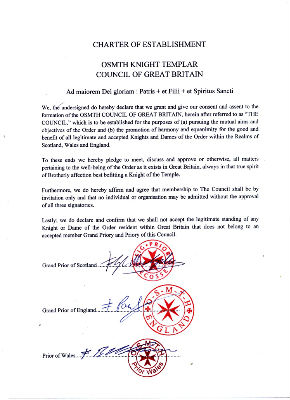 We, the undersigned do hereby declare that we grant and give consent and assent to the formation of the OSMTH COUNCIL OF GREAT BRITAIN, herein after referred to as “THE COUNCIL”, which is to be established for the purposes of (a) pursuing the mutual aims and objectives of the Order and (b) the promotion of harmony and equanimity for the good and benefit of all legitimate and accepted Knights and Dames of the Order within the Realms of Scotland, Wales and England.

To these ends we hereby pledge to meet, discuss and approve or otherwise, all matters pertaining to the well-being of the Order as it exists in Great Britain, always in that true spirit of Brotherly affection best befitting a Knight of the Temple.

Furthermore, we do hereby affirm and agree that membership to The Council shall be by invitation only and that no individual or organisation may be admitted without the approval of all three signatories.

Lastly; we do declare and confirm that we shall not accept the legitimate standing of any Knight or Dame of the Order resident within Great Britain that does belong to an accepted member Grand Priory and Priory of this Council.

Signed and Sealed by:

Grand Prior of Scotland (H.E. The Chevalier Gordon MacGregor KGCTJ)*

Grand Prior of England (H.E. The Chevalier Paul Gant KGCTJ)

* The Grand Master appointed Chevalier Gordon MacGregor as Grand Prior General of Great Britain on 22 April 2013.