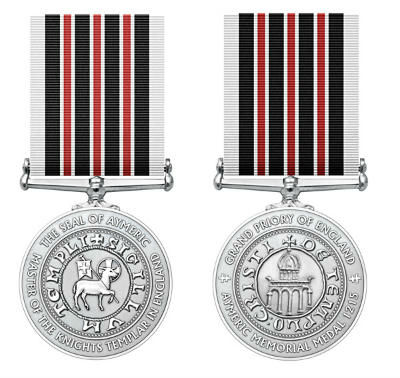 The design of the Aymeric Memorial Medal and Medallion is based on the medieval seal of Aymeric de Saint Maur, the Master of the Knights Templar in England at the time of the sealing of Magna Carta at Runnymede in 1215.

Aymeric was one of the most powerful men in Britain.

Cast of a statue of Aymeric which stands in the Parliamentary Chamber of the House of Lords in London near to Her Majesty's throne.

Aymeric worked with Archbishop Stephen Langton to produce the original draft of Magna Carta.  He was named by King John within the text of Magna Carta (see the Magna Carta page on this website) and was present as a witness to the events at Runnymede on 15 June 1215 when John sealed the document.  Many of Aymeric's Templar knights were also in attendance. 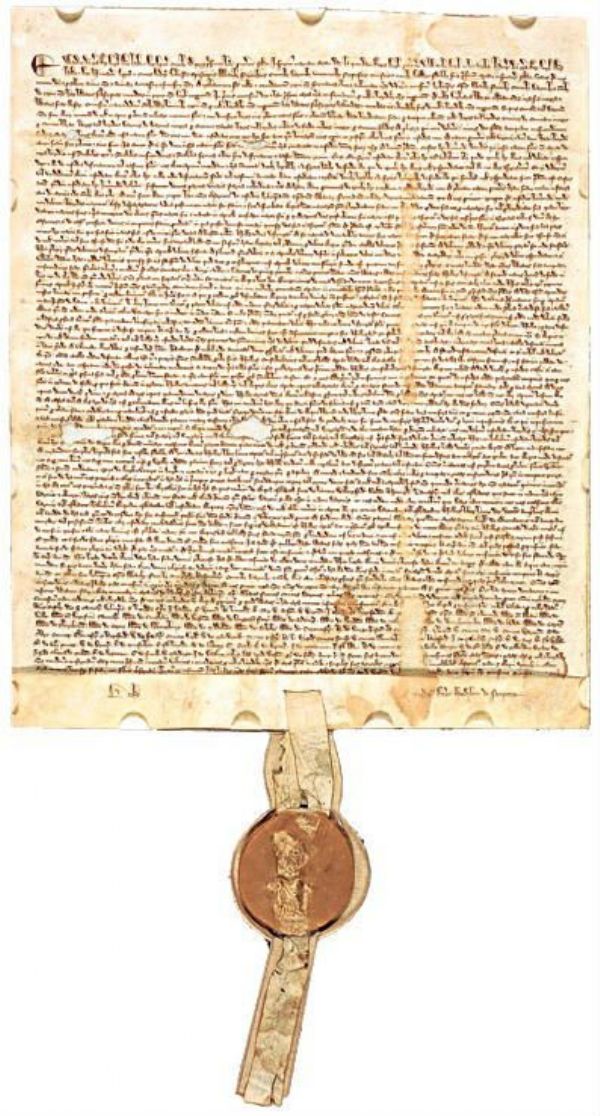 Aymeric was subsequently appointed to be one of the 13 nobles, led by his friend, the Earl of Pembroke, Sir William Marshall (known as "The Greatest Knight ever"), to be the Council of State for the young King Henry III who succeeded to the throne after the death of King John.  When Sir William was dying he was admitted to the Order of Knights Templar and subsequently buried alongside Aymeric, in front of the altar at the temple church in London when his effigy can still be seen.

During the 12th and 13th centuries the Great Seal of the Grand Masters of the Knights Templar showed on one side a representation of the Church of the Holy Sepulchre in Jerusalem to which pilgrims travelled and the Templars sought to protect.  On the other side was the Order's symbol of two knights on one horse, indicating their vow of poverty.  Many Provincial Masters also used this seal, according to a document issued by Pope Innocent IV in 1251.

However, the symbol of the two knights on one horse was not used in England.  Instead the seal of successive Masters of the Knights Templar in England - for example, Richard of Hastings (1160-85), Aymeric (1200 onwards), Robert of Sandford (1241) and William de la More (1304) - all showed Jesus Christ as the Agnus Dei (Latin for the Lamb of God).  This also echoed the belief that Jesus came to Britain as a young boy with his 'uncle', Joseph of Arimathea - as indicated much later (1804) in William Blake's well-known and well-loved hymn: "Jerusalem":

And did those feet in ancient time
Walk upon England's mountains green:
And was the holy Lamb of God,
On England's pleasant pastures seen!

In heraldry the Agnus Dei is usually blazoned (explained and described) as: "a lamb passant proper, with a halo or charged with a cross gules the dexter forelimb reflexed over a cross staff from which a pennon argent a cross gules (Saint George) is flotant".

The seal depicted on each side of the Aymeric Memorial Medal is derived from one of the Templar seals in the British Museum which displays the Agnus Dei on the front, and the Church of the Holy Sepulchre on the reverse: 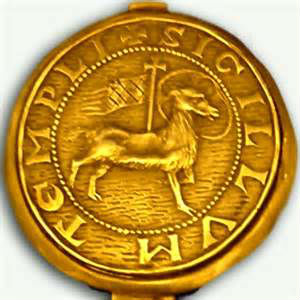 The medal's ribbon is based on one of the international arms of the Order:

One of the Arms of the International Order OSMTJ

and superimposed are three red stripes to represent the Great Banner of the Order:

These superb medals have been manufactured by one of the United Kingdom's leading makers of the Armed Forces gallantry and service medals to the exacting standards and size of the medals they produce under licence for the Ministry of Defence.

Normally these medals are only available to Knights and Dames of the Order.

The following are photographs of both the front and the back of an actual medal, showing the ribbon attached: 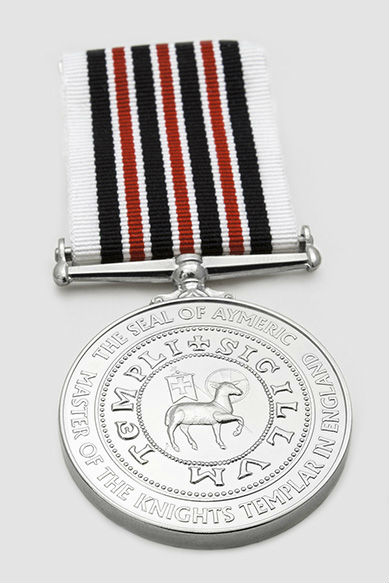 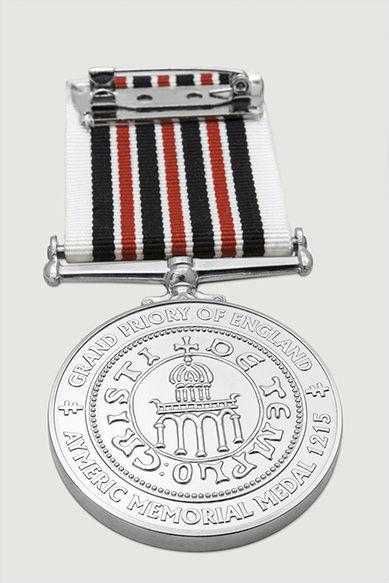 The medals are a standard 36.6mm in diameter, suspended from the ribbon and supplied in a neat box and are 'ready to wear'.

They have been available since 15 June 2015, the day of the 800th Anniversary celebrations at Runnymede in Surrey, of the sealing of Magna Carta.

Ten (only) solid silver, London 2015 hall-marked, medals were made.  They were numbered 01, 02, 03 ... 10.  These have all been allocated and no more will ever be produced.  Her Royal Highness, The Princess Royal, was given medal number 01 at Runnymede on 15 June 2015 when we there with her for the re-dedication of the American Bar Association rotunda: 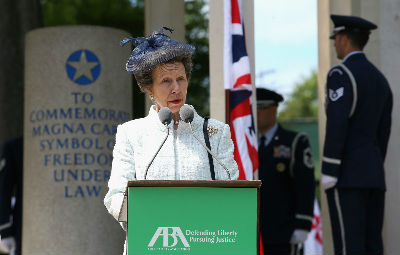 The white-robed Welsh and English Templars, below, represented the original 25 Barons who were appointed to act as guarantors that King John would honour the terms of Magna Carta: 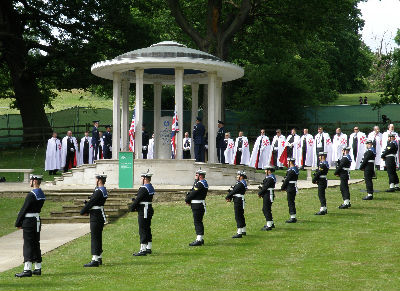 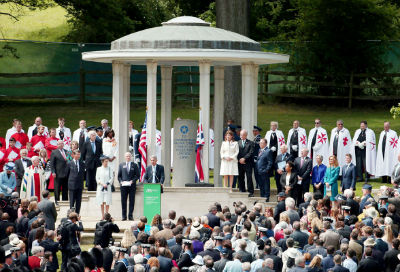 Others who have received the Aymeric Memorial Medal include: 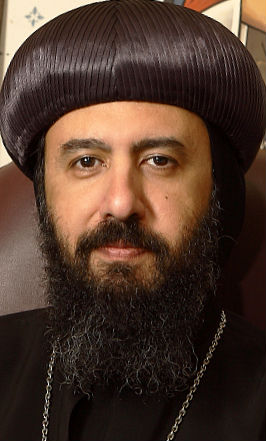 of the Coptic Orthodox Church in the United Kingdom 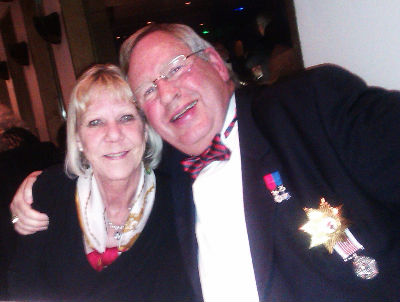 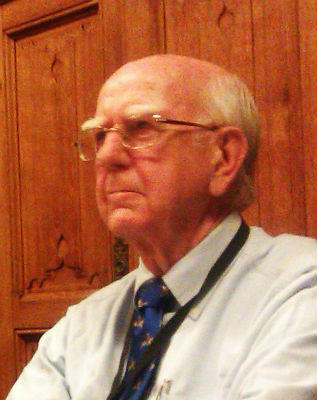 The Aymeric Memorial Medallion (the medal without the ribbon and suspension) is cast in bronze and supplied in a velour pouch: 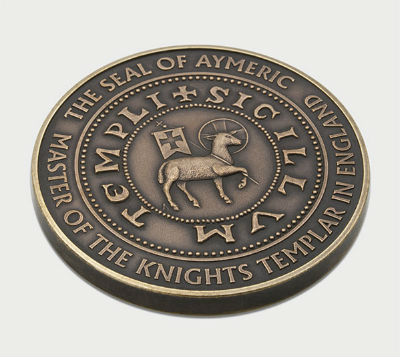 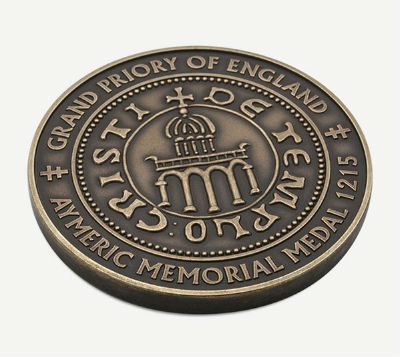 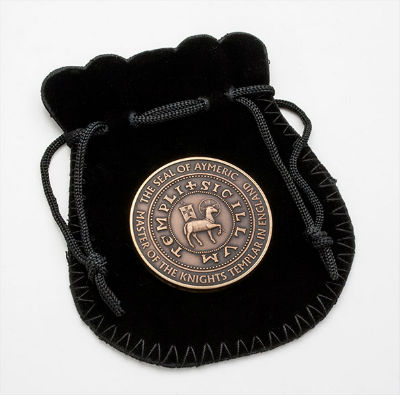 Cast of a statue of Aymeric which stands in the Parliamentary Chamber of the House of Lords in London near to Her Majesty's throne.