Occasionally we are asked why we have no connections whatsoever with any Freemasonry or other Masonic organisation, British or Foreign.  The answer is quite simply - we are 100% a Christian organisation and as such we are called upon to demonstrate the superior excellence of our faith in our Lord and Saviour Jesus Christ as the One True God, in Unity with God the Father and God the Holy Spirit.

There are undoubtedly other 'faiths' - religious or otherwise - but Jesus himself said: "I am the Way, the Truth and the Life, no one comes to the Father except by me".

On the other hand, Freemasonry requires members to accept that whatever a man's religion of mode of worship is, he is not excluded from joining and further that he is to demonstrate the superior excellence of whatever faith it is to which he adheres.

We avoid the obvious clash of such loyalties which must exist in practice because all of our members are of the same faith - Christian.  In addition women, as well as men, are welcome to join us.

The following is a photograph of an opening page of one of the oldest copies of the Constitution of Freemasonry, dated March 1867 and "Published by the Order of the Grand Lodge" at Freemasons' Hall, London. 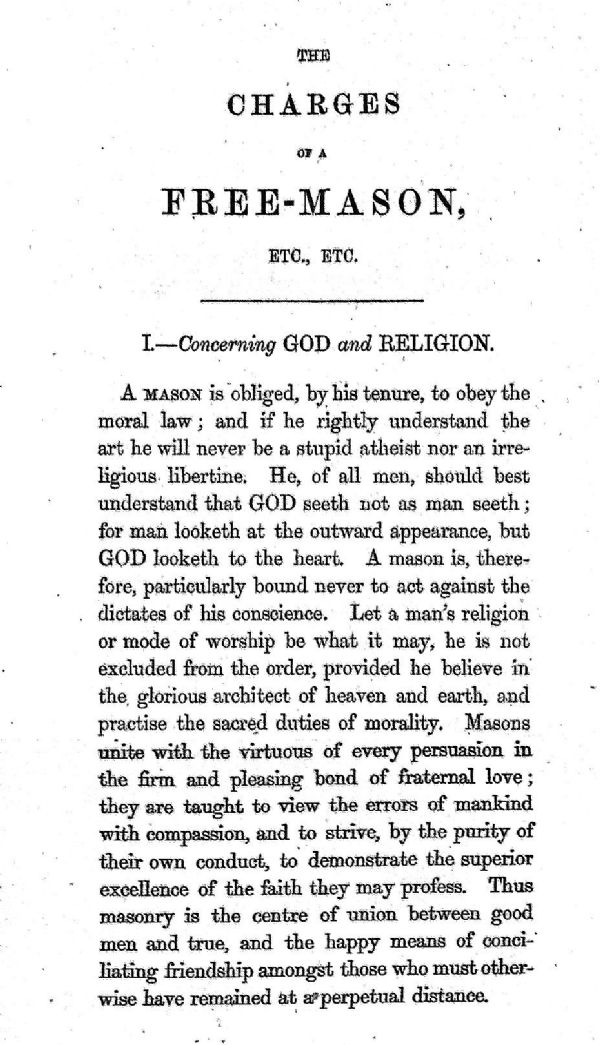 Let a man's religion or mode of worship be what it may, he is not excluded from the order, ....

to demonstrate the superior excellence of the faith they may profess.

How therefore could a true Knight Templar stand up within a Masonic Lodge meeting and openly declare as a Christian that Jesus Christ is Lord and none other?

To date not one single Freemason has told us that he is a genuine Christian and that he has made such a declaration.

In short, adherence to Freemasonry is indeed incompatible with being a Christian.