That they may all be one

So that the world may believe

The Order - world-wide - is firmly committed to the high ideal to be absolutely at one with Jesus Christ in his prayer that all Christians might be one with him, as he is with the Father:

In 1986 and 1987 individual Christians and representatives from just about every church, denomination and grouping in Britain and Ireland prayed and studied - with literature, radio and television broadcasts to assist - about how to make progress towards Christian Unity.

National Conferences were held in each of the four nations which make up the United Kingdom, with a final meeting in September 1987 at the Hayes Conference Centre at Swanwick in Derbyshire.  Amongst the many in attendance were the leaders of all the main churches.  Our present Grand Prior was there representing one church group.  The then Church of England Archbishop of Canterbury and the man who is now the Roman Catholic Cardinal Archbishop of Westminster, Vincent Nichols, was also present.

We Knights Templar do our best to live out the ideas and ideals laid out in The Swanwick Declaration.

The 'Swanwick Declaration' of 1987 paved the way for the creation of 'Churches Together'. The Declaration is commemorated by a plaque outside the chapel at the Hayes Conference Centre in Swanwick, Derbyshire: 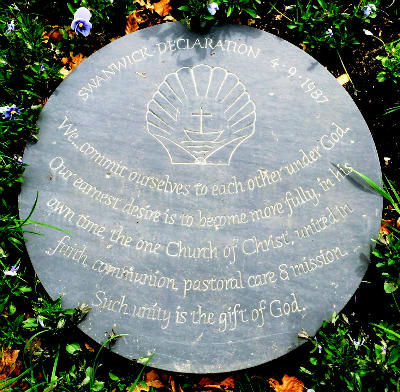 The following `Swanwick Declaration' was adopted by acclaim and personally signed by those present at The Hayes Conference Centre, Swanwick, on Friday 4 September 1987.  The Conference asked that it should be read in churches in England, Scotland and Wales on one of the Sundays in October.

"Appointed by our churches and under the guidance of the Holy Spirit we declare that this, the broadest assembly of British and Irish churches ever to meet in these islands has reached a common mind.  We are aware that not all Christians are represented amongst us but we look forward to the time when they will share fully with us.

"We came with different experiences and traditions, some with long ecumenical service, some for whom this is a new adventure.  We are one band of pilgrims.  We are old and young, women and men, black and white, lay and ordained and we travelled from the four corners of these islands to meet at Swanwick in Derbyshire.  There we met, we listened, we talked, we worshipped, we prayed, we sat in silence, deeper than words.  Against the background of so much suffering and sinfulness in our society we were reminded of our call to witness that God was in Christ reconciling the world to himself.  We affirmed that this world with all its sin and splendour belongs to God.  Young people called on us to be ready to sort out our priorities so that we could travel light and concen­trate on our goal.  Driven on by a gospel imperative to seek unity that the world may believe, we rejoiced that we are pilgrims together and strangers no longer.

"We now declare together our readiness to commit ourselves to each other under God.  Our earnest desire is to become more fully, in his own time, the one Church of Christ, united in faith, communion, pastoral care and mission.  Such unity is the gift of God.  With gratitude we have truly experienced this gift, growing amongst us in these days.  We affirm our openness to this growing unity in obedience to the Word of God, so that we may fully share, hold in common and offer to the world those gifts which we have received and still hold in separation.  In the unity we seek we recognise that there will not be uniformity but legitimate diversity.

"It is our conviction that, as a matter of policy at all levels and in all places, our churches must now move from co-operation to clear commitment to each other, in search of the unity for which Christ prayed and in common evangelism and service of the world.

"We urge church leaders and representatives to take all necessary steps to present, as soon as possible, to our church authorities, assemblies and congregations, the Report of this Conference together with developed proposals for ecumenical instruments to help the churches of these islands to move ahead together.

"Continuing to trust in the promised gift of the Holy Spirit, we look forward with confidence to sharing with our own churches the joys of this historic Conference.  We thank God for all those who, from Lent '86 and before, have been part of this pilgrimage.  We feel their presence with us.  We urge our churches to confirm by decision and action the hopes and vision on which we have laid hold, and which we shall not let go.

"This is a new beginning.  We set out on our further pilgrimage ready to take risks and determined not to be put off by 'dismal stories'.  We resolve that no discouragement will make us once relent our avowed intent to be pilgrims together.  Leaving behind painful memories and reaching out for what lies ahead, we press on towards the full reconciliation in Christ of all things in heaven and on earth, that God has promised in his Kingdom.

"Lord God, we thank you
For calling us into the company
Of those who trust in Christ
And seek to obey his will.
May your Spirit guide and strengthen us
In mission and service to your world;
For we are strangers no longer
But pilgrims together on the way to your Kingdom.
Amen."

At every Investiture Service all present say the above prayer together
and so we regularly renew our commitment to Christian Unity.